A hot day sitting in the sunshine of Wimbledon wasn’t the best preparation for an even hotter Sunday and what is now called the British 10k – it was just the London 10k when we first ran it in 2007, my last race before ten years of not running. Meanwhile, it was 30 degrees and promising to get hotter.

And it’s a far cry from the races we are used to in Norfolk, with approaching 15,000 runners in all, with eight starting pens and a staggered start. In other words, you queue up to start with about 2,000 other runners, many of whom are running for charities and are not quite sure what they’ve let themselves in for! Louis Vuitton supporting UNICEF were next to us.

So in the morning, we were dropped off in Covent Garden and walked down to Trafalgar Square and then to the starting pens in St James Place  – we had to be there for about 9.00 Once there, it was music and warmups. The race itself started at 9.30 but but the time our pen got to the start line it was 10.10 although, thankfully the waiting was in the shade!

And then it was off up Piccadilly and a slightly uphill start before turning left up Regent Street and then down again the other sunnier and therefore much hotter side. Then around Piccadilly Circus, along Lower Regent Street and out and back along Pall Mall. The out and back sections were like the part of Kings Lynn Parkrun where you have to go round the lamppost. The first water station was on Pall Mall and that meant that the next couple of hundred metres were an obstacle course of discarded plastic water bottles under foot.

After that, it was up to Trafalgar Square, up and down Charing Cross Road, and then down along the Strand and the second water station obstacle course. Then it was a short run east along the Embankment to Temple where fellow Runner-next-the-Sea Adam Tomkinson was waiting to cheer us on.

At Temple we turned back down the Embankment in the other direction towards Westminster with the Thames on our left. Just before Westminster Bridge came the third water bottle obstacle course and when we got to the bridge we knew we were nearly there. Past Big Ben still in its scaffolding, past Parliament, past Westminster Abbey, along Victoria Street and finally up Whitehall to finish somewhere around Downing Street.

Then it was back to Trafalgar Square to meet other family members before the walk home to Bloomsbury.

On Strava, I described it as hot and horrible – and it was. What made it horrible for me was not the heat so much as the number of people. It was impossible to get into any kind of running rhythm because so many people kept stopping in front of you to walk, sometimes two or three abreast. But worst of all was the people crossing the road in front of you, sometimes with suitcases, forcing you to brake sharply. Indeed, Ceri was heard to utter a few sharp words on more than one occasion – Ceri tells me that Lucy Harrison and Lynne know what! So our race tactics were quite simple – don’t go too fast, don’t fall over, just keep going, smile and run all the way. Which we did!

But the real positive of the day was that our brother-in-law did it as his first run in about 4 years. He’s asked Ceri to book him on another – but not for six months! 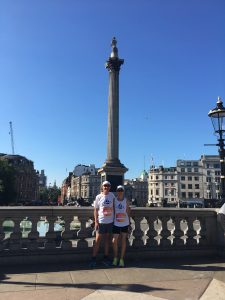 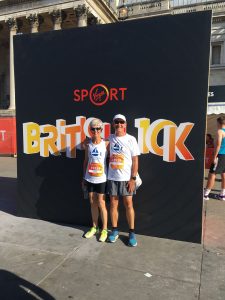 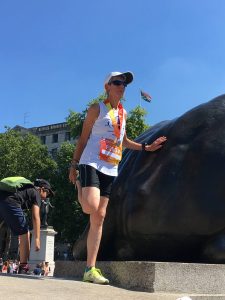 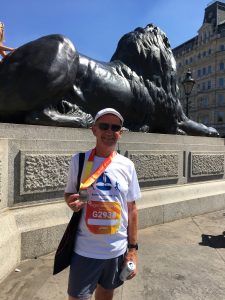