I was excited to be toeing the start line knowing that if all went well and I completed the race that I would be one of 11 Grand Slammers, having done Peddars’ Way (48 miles) in January and Norfolk100km in June. In addition to the medal and t-shirt every finisher receives, I would be presented with a tankard. My motivation to do the race wasn’t the tankard (!) but the thought of participating in another ultra event and also becoming a grand slammer. Not having run any of the route before I didn’t know what to expect but we were informed that there were two loops of the same route (first loop for half marathon and second for marathon distance) before a different, additional 5 miles at the end for those doing the ultra. I assumed it would be mostly flat, though not sure why.

The checkpoints (cps) would be at miles 3.5 / 9 / 13.1 / 16.5 / 22 / 26.2 and we could have our own drinks ready at each cp. As I like to use Tailwind for electrolytes and flat coke for caffeine intake, I got these ready for the cps. I also had Tailwind in both of the bottles in my hydration vest.
Getting ready for the race, after a good breakfast, I wore my sleeveless baselayer under my RnTS t-shirt as it always keeps my body core temperature comfortable, and I put my compression shorts and compression sleeves on. I would take my compression arm sleeves off during the race if it were to get too hot. The terrain could be damp in places so I wore my Drymax socks as these wick away moisture very effectively and I put my Scott trail shoes on. It was a cold morning – in fact 5 degrees Celsius before dawn and it would take a while for it to get up to double figures. The course was through a country park and a forest so I assumed the trails would be mostly sheltered. Anticipating to be running in the cold and seeing temperatures drop to lower than I envisaged for the day, I decided to quickly change my base layer and wear my long-sleeved compression top (which has a lining for insulation) under my t-shirt. This would keep me warmer. Tim, my husband, was a little surprised that I’d ditched my careful planning of what I’d wear for the race and that I was opting for a warm long-sleeved top. However, there wasn’t any time to reconsider my running gear as it was time to leave. We had a longish drive ahead. I was warm and comfortable.

We arrived at the start after a pleasant drive through quiet roads. The sky was awesome and I knew a beautiful day was ahead of us. On arrival I saw Sam who I’d run with some of the time during Norfolk100k. She would be marshalling so I knew I’d see her several times ? I also saw Erika, another runner I ran with at Norfolk100k. She was also running the King’s Forest Ultra ?

My planned running strategy was 11 minutes per mile, roughly speaking just over 7 mins per km. 3-2-1-GO! Oh the adrenaline rush and the buzz you get when you see other runners all around you, all raring to go. I didn’t need to check my watch to know I was going faster than I wanted to. The glance at it of course confirmed this. The trail was initially by a river and a lake. Knowing the first cp would be just over a parkrun away made me feel good and I was running happily but much faster than I’d anticipated. I arrived in cp1 strong and ready to carry on at a good pace. I had some water here and didn’t need anything else. Sam was one of the marshals here so we had another hug and she gave me reassuring words and sent me off on my quest. All was good.

The stretch between cp1 and cp2 was open breckland and involved a climb. While it wasn’t steep it was a gradual ascent (maybe 3%-4% gradient maybe much more, but I do not know) and the end was not visible so just as I thought I was nearing the top I saw more uphill ahead. During the climb my bpm was going high and sweat was dripping from my face. It felt like I was running in a sauna. Why had I put this warm compression top on??!

I calmed down, tried to dry the sweat off my face and neck with the buff I was carrying and put my cap on as the sun was getting quite strong. I kept at a reasonable pace running up the hill but wasn’t too amused that I’d be coming up here again for the second loop after visiting cp1 the second time round. I was managing to run despite much more slowly than I would have liked to. When I arrived at cp2 I was over the moon as it was in the shade. I could have some of my coke which was blissful at this point and I could see that the terrain ahead was more sheltered and not uphill ? cp3 where the first loop and half marathon distance would finish was not too far away. I think I had second wind by this point and ran more strongly. A top up of Tailwind and drinking more coke, I grabbed a handful of pretzels and headed out for the second loop. Once again past the river and the lake heading towards cp1 (which in effect would be cp4). I was running quite well and my spirits were quite high. Sam greeted me happily at the cp once again. I grabbed a handful of crisps and off I went with her words ringing in my ears “Now go get this tankard. I’ll probably be there to see you finish once we’ve packed up the cp” ? I was going to try my best. However approaching the hill once again slowed me down – this time mentally rather than physically. The hill wasn’t steep but why was I not able to take it in my stride? I noticed I was still sweating buckets and by now my hands were very swollen and red! I put it down to the salt intake. I’d prepared my Tailwind mixture much stronger than usual and was only carrying this drink and no water with me. Hmmm big mistake. One of my bottles should have contained water. With at least 5 miles to the next cp where I’d be able to drink water I could only hope that the swelling was nothing serious. I tried to relax and treat myself to some liquourice allsorts. Realising that my bpm readings were still around 170 I decided to opt for a run/walk strategy. This disappointed me as the terrain was not difficult and the hill was not that steep despite seeming endless.

My running from this point onwards (roughly from around mile 17) involved 2/3 of a mile running and the rest walking (counting to 25 with every second step during walking breaks). I noticed other runners in front and behind were using their own run/walk strategy, too. My legs were strong but it was my mind saying I needed the walking breaks. I wasn’t going to fight it as I was going at a reasonable pace. The next cp was in sight. I emptied one of my bottles and asked for some water which I drank up and then had a refill of water to take with me. I also downed the 100ml coke that was waiting for me at the cp. I find flat coke works marvels as it gives a nice caffeine kick! It’s easy on the tummy too. The route between this cp and the next one was lovely and not that far to the cp so I was happy to try and go for it with less walking and more running. It was mostly downhill, too, which I liked.

As I approached the marathon distance and what would be the final cp, I caught sight of Tim who was clapping happily. Sam was also there waiting ? She thought I’d finished but I had 5 more miles to do. More coke and a few more pretzels later I set off for the final short loop. This time my legs were wanting me to slow down but my mind was wanting me to go faster. I compromised and carried on with my run/walk strategy. Approaching the last mile I got into a good running rhythm. The marshals were cheering along the way and soon I caught sight of Tim and many others cheering as I approached and crossed the finish line! Sam was waiting with my medal in her hand. It was all very emotional. It was also Sam who presented me with the tankard. She’d waited till I’d finished so that she could do all this! Erika who’d finished about 10 mins before me had also waited to see me cross that line. Participating in events has a bonding effect in runners. While individually we want to challenge ourselves and do well, we also take pride in others achieving their goals too. The camaraderie is priceless.

At this point I should add how much I value the support Tim always provides me with. Without him my running wouldn’t be where it is today. I feel lucky to have his full support and to see him take pride in every event I participate. He has successfully crewed me at races, ensuring that my needs are catered for so that I can have a successful event. He had got Guinness ready for me to enjoy drinking it out of my tankard ?

Running is an addiction for me and participating in long distance running events is always tempting. I guess it’s a good addiction to have ??‍♀️ 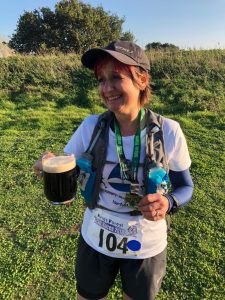