On the 1st July 2018, Dene and Amanda took part in the Outlaw Half Holkham.  Well done to you both for your fantastic achievements.

Here is Dene’s report on the day….

What a great day Sunday was.  I think the entire event was extremely well organised and the support given by the volunteers was not only incredible but genuinely helpful.  Holkham is a stunning setting which gives the whole event a great vibe, but I think it’s the people really make it something special.

With the RuNTS taking over feed station 2 it honestly felt like coming home each time I ambled in to be greeted by all manner of consumables and heaps of encouragement (if only you could bottle that).

From a personal view, I’d been training since Xmas for this event.  I learned to freestyle swim from scratch in the local pool and had never cycled more than 5 or 6 miles on a bike before this.  These parts of the challenge were virgin territory for me so I’ll confess to a little trepidation on the days leading up to the event.

When I arrived I was relieved to see a few larger and older athletes, there were so many young, chiselled, sculpted specimens preparing their transitions that I did begin to doubt if my “dad bod “ and little ricketed legs would be up to the task.  I got there early and did some steady warm up jogging before grabbing my wet suit and heading over to the water.  I was surprisingly calm entering the lake, I guess I’d figured that there was little more I could do at this point and that I should just try and enjoy the event, and enjoy it I did.

I was barely in the water 30 seconds before wave two were sent off, I always swim much better in the second half of my swim so I set off with a breast stroke to ease myself into a routine and warm up, soon I was throwing in a few sets of freestyle and gradually transitioning over to freestyle only.  I purposely stayed out of the “churn” and hugged the margins towards the rear of my wave.  Call me a wimp but I didn’t want to have to focus on anything other than my stroke, breathing and pointing in the right direction, which is surprisingly hard might I add.

Before I knew it, I was in my stride and rounding the island at the end of the lake, it only seemed like moments since I’d set off but already I was almost half way.  I felt good so I just carried on doing what I was doing, dragging 20 strokes before a “sighter stroke” to ensure I was on course, a surprising amount of adjustments were needed, I tend to pull to the right for some reason.  It was at this moment I realised I was actually enjoying the dreaded swim and for the first time I felt like a proper triathlete even if it was a slow one.

Although a good way off I had the last buoy in sight and knew that just a sharp left here would have me almost back on the bank, so I knuckled down and just kept working until I was close enough to start thinking about turning.  It was at this point that the faster swimmers from wave 3 Swam past/over me, even with a 12 minute head start I was no match for these guys, I got out of the way and let them past, before rounding the buoy.

I could see the platform in sight and went for it, as much as I enjoyed the swim I wanted to get one of the disciplines “ticked off”.  I was surprised how dizzy I was as the kind volunteer grabbed my hand and towed me in, more volleys undid my wetsuit and I was away, jogging (staggering) to my first ever triathlon transition.  It was good to see a few familiar faces and hear a few shouts of encouragement as I navigated the Harris fencing on my way to my bike.

It was good to hop on the bike and start nibbling away at the 56 mile ride, what struck me early on was how much of an amateur I was, I had an entry level bike and helmet, running shoes instead of cleats and no specialised cycling gear, it didn’t bother me but It did make me wonder how much difference this could make when I saw other athletes not only overtaking me but whizzing past at a considerable speed.  I stuck to the plan which was to ride my own race and before I know It I was out of the south gates of Holkham and orbiting the park, I passed the Vic where I waved at some of my colleagues and headed out west.  At this point I was still getting overtaken quite a bit, I was in the 2 Wave so there were plenty of younger/better participants that started after me that were catching up, this was a trend for most of the cycle until perhaps the last quarter.

It was great to hit the first feed station at Fring and continue on to Dersingham and the beautiful Sandringham.

By this point I’d stuck up a little unofficial rivalry with a chap called Darren, I would pass him going uphill and he would whiz past me on the downhill…. he was a rather large chap I hasten to add.  Eventually we hit the A148 and while this is a nice smooth surface with great views, we had a headwind of 12-14 Mph to sap away at our already partially depleted reserves of energy.  This stretch is about 14 Miles long but as with the rest of the course it didn’t seem long before we were turning into to the second feed station just off the Creake road, the whole thing really did fly by.  I stopped the bike for sun cream which was eagerly applied by one of the volunteers, took on more water and headed out for the last long section up the Dry Road.

I’m not sure if I got a second wind or if it was the sudden lack of wind that did it, but I felt good on this section and definitely felt like I was going a little quicker.  Sadly it was somewhere here that my tracker got stuck, leaving my wife to be concerned that I’d pulled out of the race and ultimately delaying her setting of to see me transition.  It felt good to turn into the park, be back on familiar ground, safe in the knowledge that all that remained to do was within those boundaries, this spurred me on to eat away at the last section of road up south drive and into T2.

I proudly donned my RuNTS top over my Trisuit and headed south on my first lap, I’d done a few brick runs so knew this would be a tricky few miles until my legs settled, I must confess I was quite tired by now.  The 1st lap was really tough and I had to walk/run the hills to get around, I was taking on lots of water and a little High 5 at each station, it was never sloshing around in my stomach so I’m sure I was getting this something like right.  As I finished my 1st lap I remember thinking that I might have to walk a good portion of the remainder but told myself Id keep going until that was the only option.  I managed to surprise myself a little here and using my “run/walk the hills tactic” I kept on going.

The second lap seemed much easier, my legs had settled in and I’d gotten to chatting with another virgin Half IM, this helped take my mind away from the aches and pains in my legs, back, shoulders, feet, ears, eyelids and so on.  The end of the second lap felt great psychologically as I knew I only had to get round one more time and then I was done.  I had no awareness of the time of this point, as I was only there as a “finisher” I really didn’t care, although I had harboured hopes of a sub 7.

The hill up to the obelisk on the last lap was tough, I kept reminding myself what I’d learned at running club “manage your form, pockets to sockets, back straight, lean forward”, and shouts of “keep going mate” and “don’t stop” from the other participants pulled me up the hill, I crested at the obelisk and let the welcome pull of gravity take me down the other side, this next section was by far the toughest on the course.

At this point you are still recovering a little from the hill climb and you have a long straight with a subtle but noteworthy climb to deal with, also there wasn’t breath of wind here.  Getting to the aid station wasn’t only welcome because my friends were there but also because you had that horrible stretch behind you.  After the aid station, another hill which paradoxically wasn’t as tough for some reason and when you reached the top you knew it was pretty much all downhill from then onwards.  I plodded on just thinking about getting to the great barn, then adjusting my target to the “woods” and then to the aid station, this works for me when I’m running on fumes…. or jogging on fumes.

There is a very welcoming sign just before the final aid station that tells you the distance you have covered depending on which lap you are on….”LAP 3… 12 Miles” was a very welcoming sight, I walked through the aid station taking on just water and continued to plod down American drive, I had a little walk in the shade to cool down before heading out into the baked but breezy east paddock.  I promised myself I’d run the entire track before I stopped again at the cattle grid….I proudly managed this and after a short 20 second walk I decided that I was going to run the rest regardless, I was tired but not exhausted, I could have probably done a further lap at a push but was very glad I didn’t have to.  Marie kindly joined me and ran in toward the red carpet with me where I was greeted by more of the RuNTS team who shouted me on as I had a cheeky little “sprint….sort of” down across the line.

Total Including Transitions 6:52:17.  Very happy with that.

At the risk of sounding cheesy and trite, I genuinely enjoyed the entire journey including the training, from cycling in January (brrrr) to learning to swim freestyle, learning that a lot of my limits were self-imposed, I enjoyed the mixture of disciplines and the flexibility and freshness that this affords.

It was only about 10 minutes after I finished before I was asked “so, are you going to do a full one then?”

I’d never say never, but for now, I’m going to chill a little, work on my 10k for the Wells relay and just enjoy being a free spirit again for a while.

If you ever have a chance to challenge yourself like this….you must take it, there’s something hugely rewarding about biting off slightly more than you think you can chew and getting it done!

Love to you all. 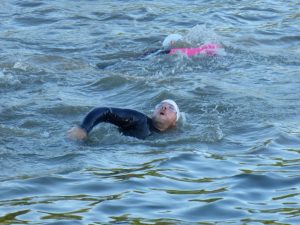 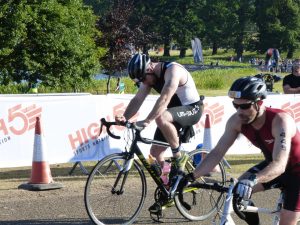 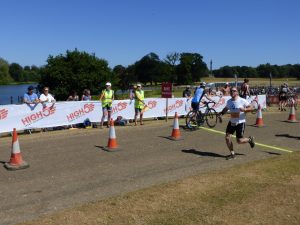 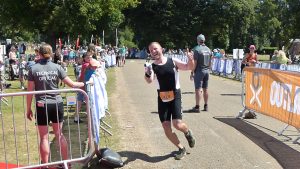