Skip to content
I couldn’t have been happier when I arrived at the start line of Chiltern Wonderland 50 on Saturday 12th September. Organised by Centurion Running, CW50 is a 50-mile (80km) race that starts and ends in Goring-on-Thames, a small village in South Oxfordshire. The race loop mostly involves running on the Chiltern hills though some of it is on the Ridgeway. The whole area is breathtakingly beautiful.
With countless races having been cancelled due to COVID-19 it was touch and go whether this race would even take place. Thanks to the organisers putting into place many safety measures ( https://centurionrunning.com/blog/2020/08/04/2020-cw50-additional-information-guidelines ) the event was given the go-ahead.
The elevation profile is 5600 feet ascent and 5600 feet descent. The gradient on some of the hills was pretty phenomenal to experience. The climb up to Turnville village to by Cobstone Mill (which featured in Chitty Chitty Bang Bang) was less than half a mile but the gradient there is 19% average with points that are 35%. I don’t suffer from vertigo but I wasn’t going to look back down to see where I’d run from. Spectacular as it would have been to see the scenery I had no intention of losing my balance on such terrain!
There were 5 aid stations each of which had a strict cut-off. I was able to meet first 4 cutoffs comfortably but was only within 2 mins of the cut off at the last aid station (at the 41 mile mark). I had to grab what I needed and leave promptly. How I wish the next stretch had initially been downhill… By now I was too tired – my quads were achy and didn’t want any more climbs. The last stretch (9 miles) was tough not because of the climbs (as they were not as steep as any before) but because my quads were quite tired. About 7 miles to go I had to put on my torch which worked wonders in the dark helping me to tread carefully in more technical terrain in the wooded areas. I heard an owl twice running in pitch black woods with only my torch providing light. It was an awesome feeling. I had to switch the torch off when I realised I was approaching some animals on an open field where it was dusk light with beautiful mist in the valley. I decided to walk down rather than run as I didn’t want to anger the cows! The runner in front who had saved me from getting lost on more than one occasion said they were horses… Phew that’s better but best not to run just in case. I had seen cows on the route in 4 places but was lucky that they were either sitting down minding their own business or were behind a gate. The last stretch between the final aid station and the finish at Goring seemed to go on forever. The last 4-5 miles there was no scenery to enjoy and I was racing against time. The runner in front of me who had started after me but had caught up with me kept encouraging me to go for it. I went past her and gave it my all several times. The time was ticking I knew it would be touch and go. 12:58:00 … I had 2 mins left to be at the finish line yet it was nowhere to be seen. 13:00:00 I’d timed out. There would be the letters DNF next to my name. Did Not Finish… I felt strange but I was in one piece and would be arriving at Goring on foot without having to be collected by anyone to be taken there. That itself felt good. My run gave way to a steady walk all the way down to Goring. It would take me 20 minutes to walk that last bit. There would be no medal no finisher’s t-shirt but I’d done the loop. I was at Goring.
The event was a great learning experience. As has happened on so many of my long distance races I questioned myself as to why I was doing this to myself and thought never again. 4 days after the race I decided that I would have another go next year…
Hydration / Nutrition during the event: I believe I got my levels of hydration right using water in one bottle and Tailwind in the other and topping them up at every aid station. I also had some Coke in the latter half and it was blissful. I felt comfortable in myself with the amount of fluids I was taking and the kind food I was having: dates, salted boiled potato, banana, crisps, cake and several babybells. In addition I had GU gels, which each time I had one almost immediately gave me the energy to tackle some of the climbs. My gut felt ok throughout.
Things I learnt:

Make an effort to shuffle however tired you may be. You never know when these extra minutes will make a huge difference;

Remember to have GU gels in the latter part of the run, too, to be able to carry on strong;

Have the course MAP on GPS so as not to worry and stop when you don’t see signs for some time or rely on other runners to doublecheck you’re on the right track ( I did have the MAP with me but I realised the platform I’d uploaded it onto was not triggered by GPS! Doh!! Check properly);

Remember not to stop to talk to people to explain what you’re doing however nice this may feel at the time – as one young boy said while his family could have carried on with the chat, “Don’t let us distract you. Carry on, you’re doing well!” 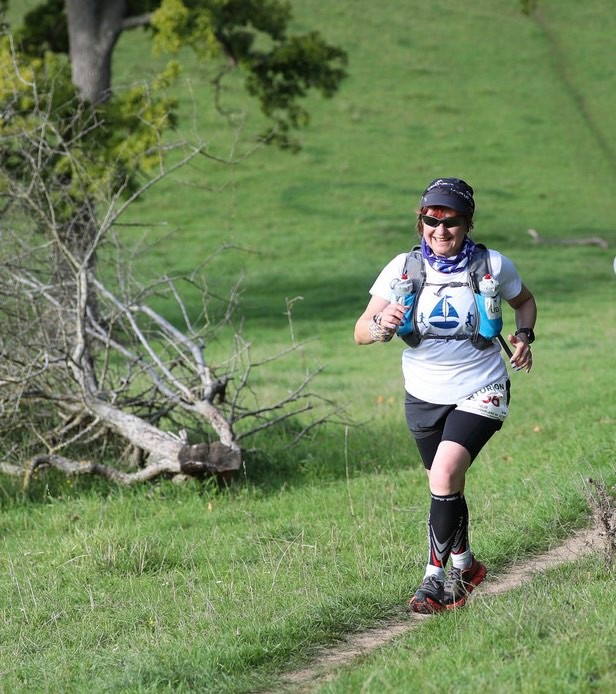